(The following article is by Charliez Zavalick, Editor of the Bernardsville News)

FAR HILLS – What would motivate a successful 80-year-old businessman to write a book about happiness?

For Edmund McCormick Jr., an author, and owner of several diverse companies, learning that a large number of his fellow citizens were unhappy with their lives provided the initial incentive.

“I read a headline that Americans’ happiness was the lowest in 20 years from a survey done by The World Happiness Report conducted by Gallup,’’ the resident of Mine Brook Road said. “Being there are so many good things going on, why would that be? I said to myself, I need to investigate that.’’

The result of his research is HAPPINESS POWER – How to Unleash Your Power and Live a More Joyful Life, the third in a series of ‘Power’ books written by Robert Gill Jr., one of several pen names McCormick uses via his publishing company, Teaching Press.

During a pandemic when many are struggling emotionally and financially, the timing of the book wasn’t a coincidence.

‘’My whole purpose was to give some hope to people because it’s such a dark time,’’ he said during a wide-ranging interview on Thursday, Feb. 4. “What can people do?’’

McCormick explores the origins and definition of happiness and tries to provide readers with simple step-by-step suggestions on how to achieve it.

The back of the book cover describes it as a “guidebook to the secrets of living a life of happiness and fulfillment.’’

McCormick reminds in the early pages that happiness is written into the 1776 Declaration of Independence, which “asserts the right to ‘Life, Liberty and the pursuit of Happiness.’ ‘’

“But what precisely is happiness?’’ he asks. “Is there a more significant benefit to possessing a happier outlook over that of the more passive realist?’’

His answer is a resounding yes. He proceeds to describe over the course of 150 pages the many benefits of happiness for one’s professional and social life, and overall mental health.

In discussing the book now, though, he acknowledges a shortcoming.

“The only thing I regret is a chapter I failed to put in, on unhappiness,’’ he said. “That’s extremely important.

On his website, McCormick openly reveals the process he follows in researching, drafting, and ultimately composing his books.

“My goal is to produce books that are accurate and current on each topic I write about,’’ he says. “My objective is to take complex subjects, often filled with professional jargon, and distill them down so they are easily understood by non-specialists. ‘’

He begins by seeking “source materials,’’ including other books on similar topics. He then searches “academic websites for articles and interviews from experts,’’ visits libraries, and reviews online journals and websites.

“To make everyone understand a complex topic, you have to take it apart piece by piece and really unbundle it,’’ he explained in the interview. “It’s like taking an alarm clock apart to see how it works. You layout the pieces.

“I take something – What is happiness, that’s a complex question – and then you pick it apart to see all of the ingredients that go into it.’’

“Happiness’’ is the third in what he calls his ‘Power’ books.

He also wrote and published self-help books on shyness and optimism:” “Shyness Power: Learn How Shyness Gives Power to Individuals,’’ and ‘’Optimist Power: You Don’t Have to Be a Born Optimist to Gain the Benefits.’’

He said he actually began writing “Happiness’’ first, but finished it last.

“I did them all in the space of about 18 months,’’ he said. “They all kind of relate to each other.

“I know I’m an ADD (Attention Deficit Disorder) type of guy because my focus is good for maybe 10 minutes and then I’m on to another thing for maybe another 10 minutes. And that’s what I was doing – I was writing all of the books at the same time.’’

The ‘Power’ series wasn’t his first foray into writing – and won’t be his last.

McCormick has enjoyed a multi-faceted career that he’s tied to his writing.

Born in Chicago, he grew up in New York, where he ultimately earned a degree in finance from the University of Long Island.

In between, though, he was “sent’’ by his parents to the Valley Forge Military Academy in Wayne, Pa. He then studied printing management at Carnegie Tech, now Carnegie Mellon College, in Pittsburgh.

“I didn’t finish,’’ he recalled. “I got so frustrated that I signed up for the draft and joined the Army.’’

After a stay in Germany, he attended an officer’s training school at Fort Sill, in Lawton, Oklahoma. He then opted out after six months by joining the Army Reserves for five years.

From there, he joined his father and helped manage his real estate business – and also began investing on his own.

Years later, he’d publish “90 Days to Your First Real Estate Investment Purchase’’ based on his successful experiences in that field.

After his father passed away, McCormick wanted to shift gears again and “do something in manufacturing.’’

“I hired a chemist to help come up with a formula to make alginate,’’ he said, a silica-free material used in making molds.

In 1995 he started ArtMolds, which is still in business today.

“We manufacture art supplies, specialty materials for mold making,’’ he said. “When a sculptor wants to make copies of his statues, he would use our materials to make those copies. We’re known for making an impression material, similar to what dentists use to take dental impressions of teeth. But we make large quantities.’’

Teaching Press has a book, “Lesson Plans That WOW!’’ by Ed McCormick and others, offering “Cross-Curriculum Standard Based Lessons for Classroom and Art Teachers,’’ that recommends project materials from ArtMolds.

McCormick’s never-ending curiosity then led to yet another business venture.

“I began reading about this chef in France making something called Modern Gastronomy,’’ he said. “He was making these very interesting bubbles of food flavors that he would decorate his dishes with.

“I said to my wife, he’s using a component of our Alginate. We should look into this.’’

He then started a company called Cape Crystal Brands, which packages alginate and other products for the food industry.

“So we’re running two small businesses, one in specialty food and the other in art supplies,’’ he said. “We have about 18 different food products that go with it.’’

And another book, The Molecular Chef written by Chef Edmund.

“I take all that stuff and I do all the experiments in our kitchen, much to the dismay of my wife.’’

The author didn’t shy away from discussing his use of multiple names.

“I have a number of books all by me or my pen names,’’ he acknowledged. “The good thing is, I don’t have to pay any additional taxes because all the people are me. And I rarely have arguments.’’

He was looking for something short and read something that led him to create the name. “Like an actor picking out a stage name,’’ is how he described the process.

McCormick said he expects to return to writing ‘Power’ books – but is now completing his first on the topic of politics.

He said he hopes to finish Hidden in Plain Sight: The Conservative versus Liberal Conundrum this spring.

Among the challenging issues, he plans to tackle: “The causes of modern political polarization, and solutions for bridging the gap between the two parties.’’

McCormick said he wants to explain to “high schoolers’’ the difference between a conservative and a liberal, and “why they think that way.’’

The author was asked to comment on the divisive state of politics in America today.

His books span many topics, but McCormick said he doesn’t do it for the money but to share information – like a grandfather passing knowledge to a grandchild.

“Independent publishers and authors – unless they’re picked up by a mainstream book company – don’t make money at this,’’ he said. “They sell in dribs and drags. My desire was not so much for the selling – I don’t need the money – it was for the writing, to put it all in one spot if somebody wants to know about it.’’

McCormick has enjoyed a long career with many success stories but says he’ll never rest on his laurels.

“I’m a perpetual curiosity seeker,’’ he said. “Anything that was interesting to me, I would always go after.’’

After having lived in several New Jersey towns, including Summit, he’s now resided in Far Hills for about a dozen years. He works alongside his wife of 18 years, Hong, who is originally from Beijing, China.

The couple has no children, but McCormick said has been hosting foreign exchange students for about a decade.

“They go to Gill St. Bernard’s,’’ he said. “They’re typically Chinese and they are so much smarter than I am. I learn something from them on a daily basis.

“The joy of learning,’’ he said, “is what keeps people young. The desire to continue to want to learn.’’

And the secret to happiness?

“It’s not to look for happiness but to give back, to show you’re grateful, it’s to be generous, to build friendships,’’ he said. “They give the joy and thus the happiness.’’

He suggested his latest book for anyone looking to improve themselves.

“Those people who are interested in improving their position in life really need to know that by increasing your happiness you’re improving your health, your career, your social circle, your friendships, your family relations.

“All of those are part of the powers of happiness.’’ 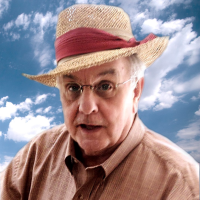 One thought on “Happiness Power Secrets”